Why Don't You Believe? 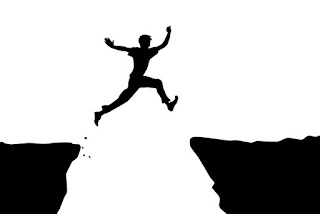 Are you one of the people who will take the leap for God? Some people will and some people won't.

The leap is one of just trusting God even when we don't know everything He's doing (Proverbs 3:5). The leap is giving Him a chance to see what He will do. The leap is going out on a limb if God told you to and trusting Him to catch you. The leap is learning to hear His voice and being in tune with His desires for your life. The leap is total commitment in believing in His promises.

Some people won't even try to accept any of that, because they want to understand everything and as long as that's the case God will seldom move in their lives. How can He when they don't believe He's the God of the possible and the impossible? They can't fathom that He can create many ways out of no ways. So they go through life getting the crumbs and living mediocre ho-hum lives. I know beyond a shadow of a doubt that there's more to God than that. How can a God like His Holiness be anything less?

You have to imagine Him lifting you higher. You have to envision Him elevating you to astronomical levels. You have to know that bigger exists and miracles happen. It's nothing extraordinary for God to make such moves. It's simple for Him. Nothing is difficult for Him. Why some people can't embrace that, beats me.

All it takes is a small amount of faith as small as a mustard seed that will burst open as the Lord blesses. That's it -- nothing hard about that. Jesus operates by faith. He said, “because of your little faith. For truly, I say to you, if you have faith like a grain of mustard seed, you will say to this mountain, ‘Move from here to there,’ and it will move, and nothing will be impossible for you” (Matthew 17:20).

Let me say that again. With faith nothing will be impossible for you. Nothing.