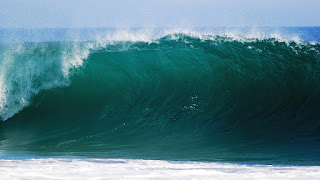 One of the many awesome things of God is that He gives us waves of His goodness.

He's not a respector of persons, which means He will use anyone He chooses to do His will. Just when it seems we're down to nothing, God is always up to something. He is always with us during the highs and lows of life. That's why we can never give up. It doesn't matter our past or present circumstances, God is in control.

I know an R&B singer who is famous. And although she grew up in the church, she and her mother wanted her to go the R&B route (no judgement there). They grinded and hit that pavement for years and nothing was happening for her. After much discouragement and rejection she was just about to give up on her dream of getting a record deal. They had done just about all they could and things weren't working out for her. Then finally a record deal came through. They were ecstatic, but only for a moment. A few short weeks later the record label had changed their mind about her, because they didn't think she was the right fit. As you could imagine, they were devastated. They had hit rock bottom. They were done and at that point she didn't want anything else to do with music. She decided to do something else like go to college or something. Yet music was her first love and she wasn't willing to walk away. Some time later there was another opportunity to get a record deal and she and her mother went for it. She had made up her mind that if that door opened it was a sign to keep going and if it didn't her life would take another turn. Well, things worked out and if I told you her name, you'd recognize it and her music. As of this writing she's still working in music and television, and her net worth is roughly 20 million dollars.

My point? God can make anything happen for anyone at anytime. It doesn't matter who and what. Only He knows the plans He has for each one of us. Remember the Samaritan Woman in John 4? Who are we to judge how God's plan looks and how God will have us impact people? His waves of goodness can happen to anyone at anytime.