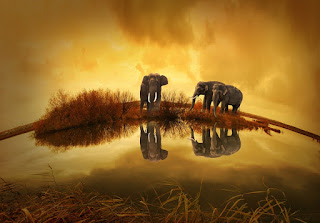 We've heard so many people tell about the story of David and the evil giant Goliath, but I've never heard anyone say that there were actually two giants in the story. One was Goliath and the other, David. Yes David.

I call this blog post The Sleeping Giant, because who would have ever thought the little ruddy David would be the one who defeated a great big giant? Goliath was the natural giant standing at "six cubits and a span" (v 4), which according to Wikipedia, meant he stood at 6'9"! Yet David was the real giant and although he was very short even compared to regular sized men, he ran towards Goliath, not away. So in my mind that is the epitome of a giant for real -- a spiritual giant, a mighty warrior, a champion, a survivor for sure. Goliath went up against a much bigger giant than himself and he lost.

Never sleep on a sleeping giant.