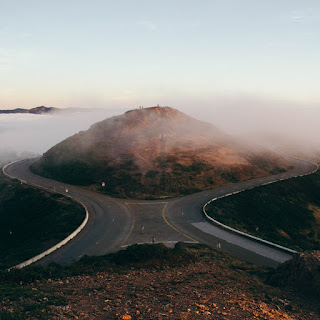 I think it's best taking the road less traveled sometimes, don't you?

When it comes to achieving great things, the people who don't care to fit in are the ones who are usually the ones who will get to where God has for them to go. Too many times people want to be a part of the crowd, because it makes them feel valuable. Let me tell you this: if you what to go where God is sending you, the crowd can't come, because God only called you. And He doesn't call the people who want to be around a crowded place, because it's too much going on and that can lend itself to chaos and too many distractions. What I'm saying is that you can't be afraid to go where no man has gone before. As long as God is with you, He's guiding you and you will be ok.

In the bible, Esther found herself alone. She was preparing to go to the next level the Lord had for her and she knew she couldn't hang out with the rest of the women. She had to focus. She knew she had to choose the road God had for her and she had to be smart about it. She eventually ended up in a great place as a result. Her story can be read from the book of Esther. It's a great story if you get a chance to read it.

At any rate, it's ok to stand alone if we are standing for God. He will make it so our choice in choosing Him pays off for us. For, He gives us the choice to choose and we must choose wisely if we are going to be used by Him.