"You Are Chosen, If You Choose": When Misfits Become Kings: Book Study Part 2 (weekly podcast episode #29) 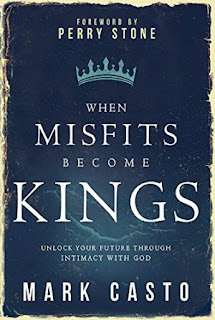 I once had a friend who used to say she didn't have a purpose. She would say she was taking each day as it came and the chips would fall where they may. She would often say, whatever will be, will be. I didn't agree with any of that, because I knew better and I know even better today. I wasn't swayed by such crazy talk.

In Casto's book, When Misfits Become Kings, our book study continues in chapter 1. The chapter title is called, You Are Chosen, If You Choose. On page 1 he says,

"The chosen are the ones history remembers--the men and women who God has used mightily and publicly. By contrast, those who are merely called tend to be the unnoticed, non-productive, second-rate citizens of the kingdom. Although such characterizations are far from the scripture's true meaning, the church has entertained this flawed comparison for generations. Most folks use this verse to rationalize their role in the kingdom, or their lack of one. They ten to disbelieve that God has a purposeful plan designed just for them. They go about their daily lives unaware of their full potential and are oblivious to their divine destiny. They simply shrug and shuffle through the day mumbling, "some are chosen...I'm just called."

Such was the case with my friend. She didn't want to dare think she had destiny and there was more to do in her life. Because you see, if she accepted her destiny, she would have to accept that she would have to work for it. Instead she lived in fear, because she had failed so many times before and she was afraid to try again. And like me, she justified all of that mumbo-jumbo -- all of that crazy thinking in her mind that she was doing the right thing. She convinced herself that all was well. I did the same thing, yes. That is why today I can spot that thinking -- that mindset from a mile away.


The bottom line is that if we want to get what God has for us, we are going to have to work for it. There's no way around it. But, He promises us great and abundant things. However, we're going to have to get out of our comfort zones. That may mean being laughed at and ridiculed by family and so-called friends, but let me tell you, that if God has it for you, God will be there strengthening you all the way through. James 2:14 says that faith without works is dead, so we're going to have to stay with it and push through continuously. And Hebrews 11:6 says that without faith, it is impossible to please God. We will get what we want and do what God wants us to do when we truly believe that He has more for our lives and we're not just existing here. We do what we believe in our hearts. When we believe it, people will see it. And we know what God put in our heart, because our heart lives inside of us and our heart is always with us, right?

When I went through my depressed years -- when I would function in the daytime, but wallowed in my grief at night -- I also tried my best to fool myself too. I would procrastinate about doing the things I know I needed to do in order to get to the plans God had for my life. I wasn't consistent, because like my friend, I too, was walking around in fear -- talking the talk, but not walking the walk. I also let certain people around me convince me that I was simply called, and the others -- the ones who were doing big things, well...they were the really special ones, because they were chosen. But as Casto says in his book, this is not how God wants us to think. No.

Don't you know, that we are all called and we are all chosen to go forth and multiply? But listen, we have to choose to be chosen. We have to make a conscious effort that we're going to do what it is we have to do. God gives us free-will to do that. But we can do it. We can do it. That means we can reach people and help them in the way God would have us to do it. You have your way based on your life, and your testimony, and your experiences, and I have mine. We all have our individual walk with the Lord. But our life is not by accident. It is purposeful and when we walk in the anointing -- when we walk in the gifts that God has given us, that my friend, is referred to as being great. That is referred to as accepting the call and choosing to be used by the Lord.

Casto says, on page 14, "Everyone who has ever accomplished anything has suffered through the growing pains of anonymity. Your obscurity is your opportunity to develop your maturity – your greatness." So, no matter what appears to be going on in front of you, behind the scenes God is still working it out just like He did for David in the bible. David’s own family turned their backs on him, but that didn’t negate the fact that David was still called and he chose and accepted the role God had for him. On page 12, Casto writes, “If David had been accepted as part of the family, he would have been pampered as a favored child instead of tempered by his battles with the animal predators in his pasture. Only by living as an outsider did he learn to depend on himself and the still, small voice of God within. Throughout his years among the sheep, that voice was his only genuine companion, his guide to greatness.” So, don’t think there’s not divine order in your life. God wants to use your life for greatness too.

Purpose is purpose and although our past is not stellar, that is the very reason God will use us. He's not looking for perfection. In fact He's looking for the opposite -- the people who have been broken -- who might even be broken now, because you've been somewhere and you can help people in their lives. We just have to open our mouths and choose to be chosen. Yes, you are chosen if you choose to be.