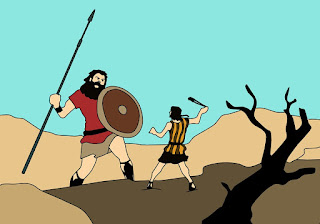 Many of us know the great story of David and Goliath, don't we? It was the story in 1 Samuel 17 when David confronted his giant, Goliath. It was the story in which David didn't back down to a problem he saw that was bigger than him -- bigger than the people around him. David fought back against what ailed and pained him. He went forward, because he knew to where his strength came and he called upon it. These were some of David's powerful words against his giant problem: “You come against me with sword and spear and javelin, but I come against you in the name of the Lord Almighty, the God of the armies of Israel, whom you have defied" (1 Samuel 17:45). David pulled from the power of God and God moved miraculously through him. Amazing.

There's a clear lesson here as we can see. It's simply that we too, must be willing to stand against anything in our lives we see as giants. That can be a person, place, or a tangible (touchable) or intangible thing. We too, can be as David and go forth, not flee from our challenges like all the others before David. If we want different we have to be the ones who do different. That's going to be one of the major factors in making our giants run from us or be taken out all together. We have the choice of the outcome.

We must make the choice to use the power of God that dwells in us. And God will move through us as He did with David. That's not a problem for God. Nothing is.