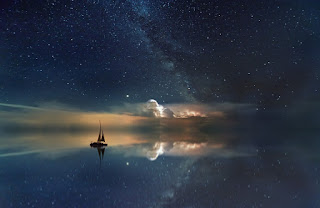 "Now Thomas, one of the twelve, called the Twin, was not with them when Jesus came. So the other disciples told him, “We have seen the Lord.” But he said to them, “Unless I see in his hands the mark of the nails, and place my finger into the mark of the nails, and place my hand into his side, I will never believe.” Eight days later, his disciples were inside again, and Thomas was with them. Although the doors were locked, Jesus came and stood among them and said, “Peace be with you.” Then he said to Thomas, “Put your finger here, and see my hands; and put out your hand, and place it in my side. Do not disbelieve, but believe.” Thomas answered him, “My Lord and my God!” Jesus said to him, “Have you believed because you have seen me? Blessed are those who have not seen and yet have believed.” (John 20:24-29)

Thomas doubted and Jesus had to prove His resurrection to him. It's a waste of time to doubt, because Jesus is real ok? So believe, don't doubt that God is real and what He said will come to fruition. Have faith and believe. And know that what you want, will come to you, you will get it, and the experience will be manifested. It's impossible for the Lord's promises to come back empty. So stay encouraged, don't doubt, have faith.