March 10, 2016
Many years back I used to work for a Fortune 500 company and one of the things they did before they promoted someone was to watch them. They watched who people ate lunch with and how often, they watched what they did, how much they did it, and whether it was with a crowd or alone, and they watched how people moved along throughout their day. They watched just about everything. In their minds if they were going to promote someone, give them a chance, enable them to have more power and influence over people, they knew they had to have the right people in those positions. The right people meant increased production, and increased production meant a lot more profits. Oftentimes they didn't want people who were too cozy with the people. They wanted the people who displayed leadership tendencies like tenacity, the tough courageous people who weren't afraid to go at it alone. They wanted people who were true to themselves, because this was an indicator that the person would be ok with making decisions that went against the grain or what others said and thought.

They had to have the right people. 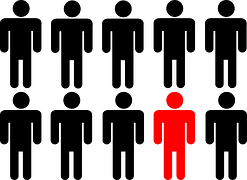 None of us were made in the cookie cutter image. That's right, none. So if any of us are trying to be something we're not, we won't get the things God wants for us. And chances are if we are promoted it won't last long, because we can't fake who we really are for too long. Our authentic genuine selves will creep in when we are not even aware and that promotion would be gone is 60 seconds. I saw this often in corporate America.

No one wants a copy, people want the real McCoy, the real deal. No need to fake it or act like everyone else. We were made individually by God in His image, so who were are is more than enough. That means the Lord made us all awesome like Him and there is no need to try to be anything different. We were all made beautifully in His eyes.

He is perfection, so how can perfection make junk?

This is all proof that before the Lord formed us in our mothers' womb, He knew us (Jeremiah 1:5) and before we were born He set us apart. He did this for us to make a difference, to help others, and for others to see His light in us. When we shine, the Lord shines. Simple. Another way to put it? It's ok to be ourselves, it's ok to be different, and it's ok to not go with the crowd. This is what great leadership is about. If we're willing to be ourselves and not be concerned about fitting in, then we will make a big splash and a big impact.