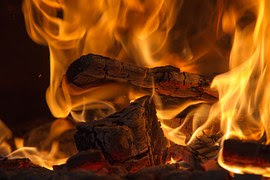 Some time ago I wrote an article about the faith of those three men who put God first and didn't compromise their belief in Him. They were willing to do what few of us would have been willing to do, risk their lives for God.

I admire them, because they stood for something worth fighting for. They were advocates for God. They loved Him that much.

In the book of Daniel, Chapter 3, during King Nebuchadnezzar's reign, it was told to him that Shadrach, Meshach and Abednego would not bow down and worship the king's god. So he put them in a fiery furnace. Yet instead of being consumed by the fire, God was with them. Literally.  He was in the fire with them and not one of them was singed or burned by it. All three of them walked out unharmed. It was like they were never even in the fire.

This is what happens when we go through our own struggles; when life events bring us harm; when we're thrown in the fire -- God is also with us. All we have to do is stay true to Him and He will be with us throughout our challenges. He will never leave us no matter how hot those flames get.

We should be encouraged by that.