Somewhere over the rainbow... 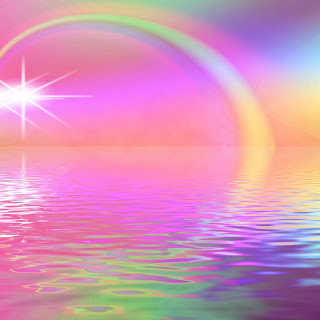 “I have set my rainbow in the clouds, and it will be the sign of the covenant between me and the earth. Whenever I bring clouds over the earth and the rainbow appears in the clouds, I will remember my covenant between me and you and all living creatures of every kind. Never again will the waters become a flood to destroy all life" (Genesis 9:13-15).

Rainbows have a powerful meaning for us. God flooded the earth because people weren't living right and the only righteous person He could find was Noah. You probably know the rest of the story...Noah builds the ark and he and his family are spared, as well as, two of every kind of animal. The rainbow is a new start and it's also God's proof that He wouldn't flood the earth again. So, when I look somewhere over the rainbow I am reminded of the goodness of God. I am reminded of His covenant -- His agreement -- His promise over our lives. "Like the appearance of a rainbow in the clouds on a rainy day, so was the radiance around him. This was the appearance of the likeness of the glory of the Lord. When I saw it, I fell facedown, and I heard the voice of one speaking" (Ezekiel 1:28). God loves His people.

Hear what Sha Sha has to say about rainbows and God's promises. Sha Sha is my avatar, so her face is based on my face and the voice you hear is actually me speaking through her.